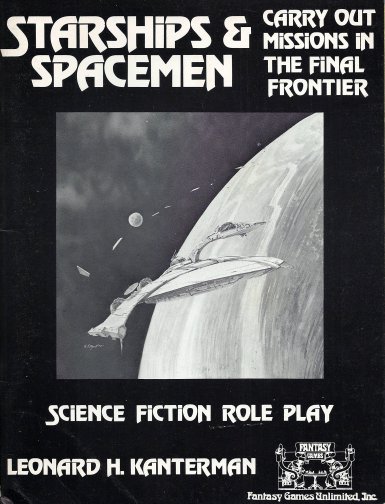 Starships and Spacemen, Fantasy Games Unlimited product number 1050, was published in 1978. I found my copy at the flea market in 1981. Sometimes I still long for the innocence and simplicity of its light and fast rules and its cartoonish  Terran Confederation with their “ultralogical” Taurans fighting the evil Zangids, all while exploring new worlds. You know the drill. Find aliens, seduce their women, fight bad guys, rip shirt, win. It was a simpler time.

For a while though, this was the final frontier for us, and I still get the nostalgic feels when I see a copy. Unfortunately, so do a lot of other people. Prices on ebay hover around $40 or $50 for this which I find astonishing. But that is nothing compared to Amazon, where it lists for up to $90. I bought my copy at that flea market for $.50, the cost of two plays at the arcade, a steal.

And, god help me, a second edition of this game exists as a PDF for just $6.45. Memory tasks me, and I must have it, but logic dictates it will never measure up.